Princeton’s Jesper Horsted is finishing up his third season with the Bears and will highlight his journey from high school, through Princeton, into the National Football League. Please join us on January 6, 2022, as we hear Jesper discuss in a live panel what it is like to represent Princeton on the Chicago Bears team, playing football at the highest level.

We will be hosting an event on January 6, 2022, with the Chicago Bears’ Jesper Horsted ‘19. Starting at 5:30pm, we will begin with a highlight video of Jesper’s career, followed by a panel with Kevin Davidson ’20 (former Princeton/Browns QB) and Lisa Barron ‘84 (former reporter at Time Inc., CNBC, CNN, and CBS News). We will end with an open discussion with the audience.

Virtual Via Zoom
Link will be e-mailed to registered guests on 1/6. 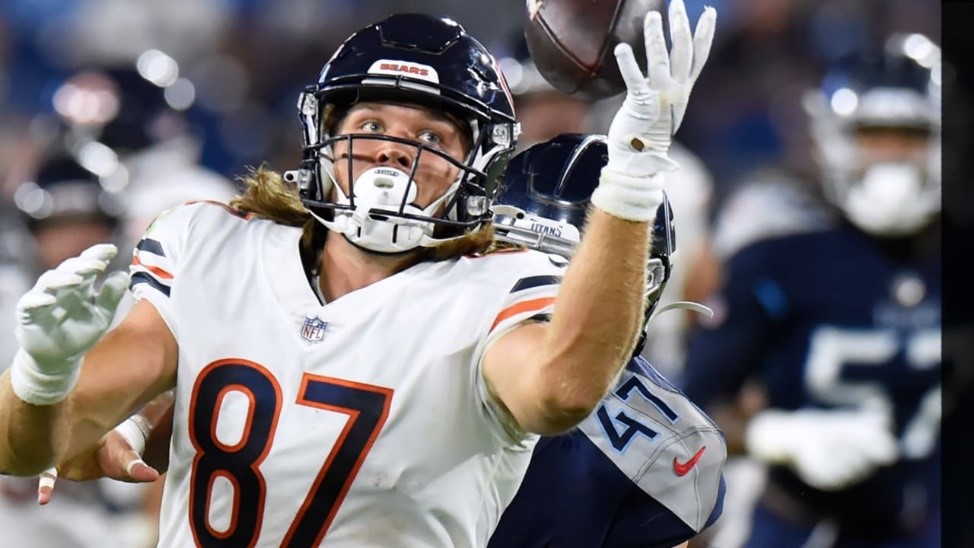 Growing up in Shoreview, Minnesota, Jesper attended Roseville Area High School. He was named the 2015 Minnesota High School Athlete of the Year by the St Paul Pioneer Press. Attending Princeton, he thrived on both the football (wide receiver) and baseball (outfield) teams. Capping arguably the greatest season ever for a Princeton receiver, he earned All-America honors, named First-Team All-Ivy, and was a finalist for the Ivy League Offensive Player of the Year award. He was invited to play in the prestigious East-West Shrine Game in Tampa, Florida. Following his performance in Tampa, he was signed to the Chicago Bears as a High Priority Free Agent. His baseball career at Princeton was just as impressive, as he was one of the best players in the Ivy League. In 2018, he started every game, except one, and led the team in average (.324), hits (44), total bases stolen (53), and on-base percentage (.408).

On the Bears team since 2019, he has served both on the Practice Squad and Active Roster. He was promoted week 12 of 2019 to the Active Roster and caught a touchdown pass against the Lions on Thanksgiving.

Lisa graduated from Princeton’s Woodrow Wilson School of Public and International Affairs before attending The London School of Economics and Political Science (LSE) on a Marshall Scholarship, earning a Master’s Degree in International Relations. Her professional career began at Time Inc. in London. She was later a correspondent for CNBC and CNN International, based in Hong Kong. She then moved to the Middle East, where she worked as a reporter for CBS News, based in Baghdad. She is now a writer/producer at Weigel Broadcasting’s CBS Decades and CBS Start TV Networks, based in Chicago.

Growing up in Danville, California, Kevin attended San Ramon Valley High School and McClymonds High School. While attending Princeton, Kevin didn’t start a game at quarterback until his junior season, when he started one game against Brown and threw for 300+ yards and four TDs (two to Jesper). Starting all 10 games his senior year, he set an Ivy League and Princeton record for most touchdown passes in one game (seven) against Bucknell. He also became the first Princeton player with at least two games of five or more touchdown passes. Similar to Jesper, he played in the East-West Shrine Game in Tampa, Florida, before being one of 16 QBs nationwide to be invited to the 2020 NFL Combine in Indianapolis. Following his performance at the Combine, he was signed to the Cleveland Browns as a High-Priority Free Agent. He was waived in September of 2020 and pivoted to the financial industry, where he is now an Investment Banking Analyst at William Blair in Chicago.