PUPPY PANDEMIC: NAVIGATING LIFE WITH YOUR DOG DURING COVID with CAMDEN OLSON ’19  - NOVEMBER 17, 2020

The Princeton Club of Chicago invites you to BYOD - Bring Your Own Dog (and some treats!) - and join us for this event with Camden Olson '19.

COVID-19 has turned our world upside down, and it has for our pets, too! How has your dog adjusted to quarantine life?  How are you and your pet impacted when we start going back to the office and to the classroom?  Learn relevant, applicable tips and training tricks for keeping your dog (and you!) happy, healthy, and more ready to handle changes to your routine together. 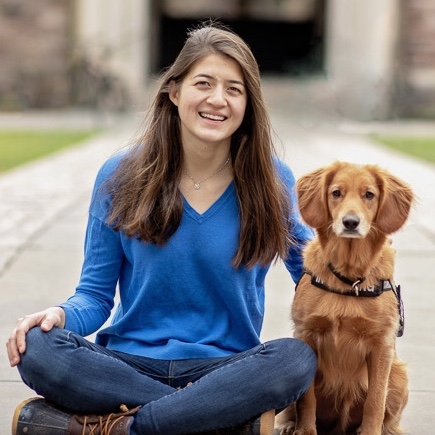 Camden has over ten years of experience training dogs. She has spent time at leading service dog and canine cognition centers across the country, including Guiding Eyes for the Blind, the Penn Vet Working Dog Center, Canine Companions for Independence, the Arizona Canine Cognition Center, and Dogs4Diabetics.

Camden has a degree in Ecology and Evolutionary Biology with a certificate in the Applications of Computing. While on campus, she was the first student to raise and train a diabetic alert dog as part of her thesis. She successfully placed Koa, a mini golden retriever, with a Type 1 diabetic. Part of Camden's thesis research has been adapted by the American Kennel Club: AKC Canine Clubs – Community Dogs program.

After graduation, Camden was awarded the ReachOut Fellowship, sponsored by the classes of ’56, ’81, and ’06.  During her yearlong fellowship, she worked with Dogs4Diabetics to write new standards for medical-alert dogs.

Camden is now working at a pet-tech startup called Companion, which has developed a device that helps to autonomously train and teach basic dog obedience behaviors.

Camden is currently training Percy, a Vizsla puppy (with Tiger thanks to breeder Elise Wright ‘83 @ olympicvizslas), to be a service dog for Dogs4Diabetics.  You can follow them and see Koa's journey during his time at Princeton on Instagram @camdens_servicepups.