The Princeton Club of Chicago invites you to attend this FREE event, open to the public, featuring Princeton Professor Wendy Warren, assistant professor of history at Princeton University.  Professor Warren specializes in the history of colonial North America and the early modern Atlantic World.

Her book, New England Bound: Slavery and Colonization in Early America, which will be available for purchase at the event, was a finalist for the 2017 Pulitzer Prize and won the Organization of American Historians’ 2017 Merle Curti Social History Prize. 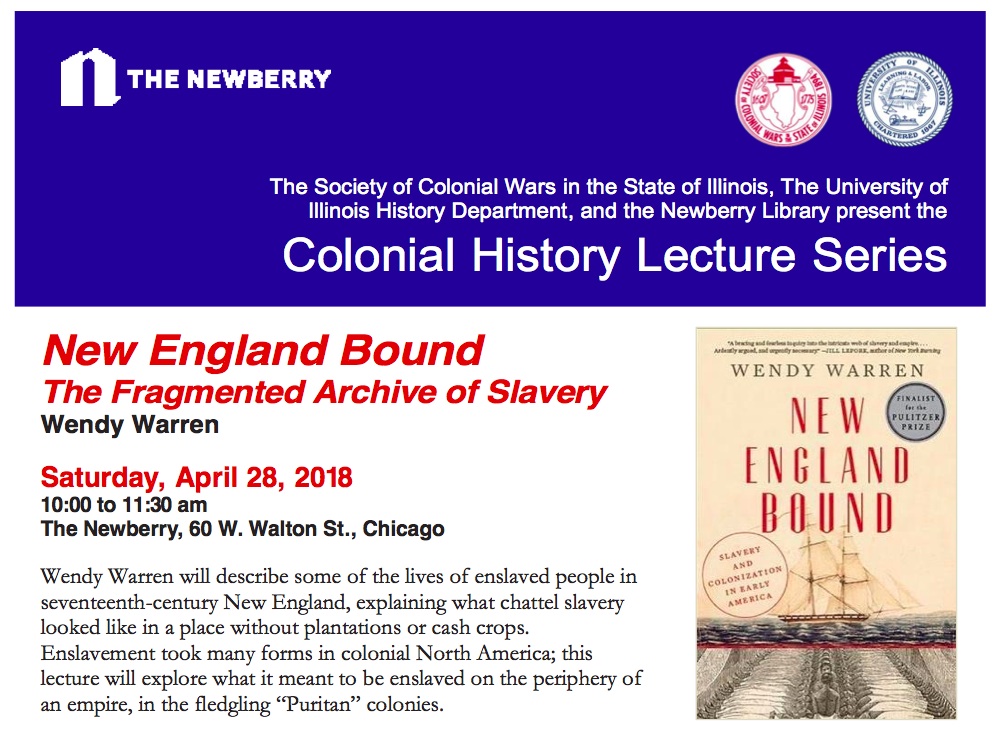 Doors open half an hour before the program begins, with first-come, first-served seating for registered attendees.
If seats remain available, non-registered individuals will be permitted to enter about ten minutes before the event’s start.
Questions? Contact the Newberry Library at publicprograms@newberry.org

WE ARE IN THE PROCESS OF TRYING TO ORGANIZE A GATHERING FOR MEMBERS OF THE PRINCETON COMMUNITY TO MEET PRVATELY WITH PROFESSOR WARREN AFTER THE EVENT.  IF YOU ARE INTERESTED, PLEASE CLICK THE LINK BELOW TO SIGN UP AND YOU WILL BE NOTIFIED SHOULD THIS BECOME POSSIBLE.

QUESTIONS ABOUT THE POTENTIAL GATHERING WITH PROFESSOR WARREN?
Contact Ryan Ruskin '90 at rruskin@ruskingroup.com

Join NOW to receive member priority reservation for PCC events, member pricing, and to support Princeton events and service opportunities.  Membership starts at only $25/year.  Class of 2017 is FREE until Class of 2018 graduates, but you must join!

Professor Wendy Warren specializes in the history of colonial North America, and the early modern Atlantic World. She is particularly interested in the day-to-day practice of colonization, and in the negotiations and conflicts that exist between would-be rulers and the unruly.

Professor Warren joined the Princeton History department after receiving her M.A., M.Phil., and Ph.D. in history from Yale University. She completed her Ph.D. while a junior research fellow at Christ Church College, Oxford University. Her book, New England Bound: Slavery and Colonization in Early America (Liveright/W.W. Norton, 2016), explores the lived experience of chattel bondage in seventeenth-century New England, illuminating the deadly symbiosis between slavery and colonization in the Atlantic World. New England Bound won the Organization of American Historians' 2017 Merle Curti Social History Prize, was a 2017 Pulitzer Prize Finalist, a Finalist for the 2017 Berkshire Conference Book Prize, and a Finalist for the 2017 Harriet Tubman Prize, awarded by the Schomburg Center of the New York Public Library in the field of Atlantic slavery.

She is currently working on several projects, among which is The Carceral Colony, an exploration of the role of prisons and imprisonment in colonial North America, and Sex Enslaved, a study of coerced sexual relationships in slave systems.