Join NOW to receive PCC Member priority reservation, member pricing, and to support Princeton events and service opportunities.  Membership is free for Class of 2016, but you must join.  Membership starts at only $25/year.

If you are experiencing technical difficulties registering, please call Alumni Services and register via credit card over the phone: 847-256-5800. 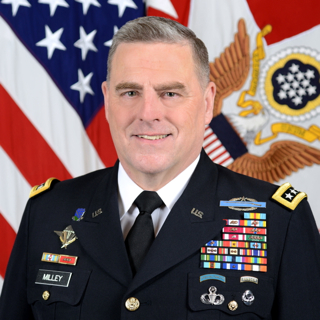 General Mark A. Milley '80 became the Army's 39th Chief of Staff in August 2015 after serving as Commmander of U.S. Army Forces Command at Fort Bragg, North Carolina.  A native of Winchester, Massachusetts, he graduated and received his commission from Princeton University in 1980 and has had multiple command staff positions throughout the last 35 years, including deployments to Operation Just Cause, Panama, Operation Joint Endeavor, Bosnia-Herzegovina, and Operation Iraqi Freedom, Iraq.

General Milley received the Woodrow Wilson Award on Alumni Day in 2016.  This is Princeton University's highest honor for undergraduate alumni.  During his years on Princeton's campus, Milley was a two-year letter winner for the men's hockey team in 1977-78 and 1978-79 under Coach Jim Higgins.  In recognition of his unique and distinguished professional career, Milley received the American Hockey Coaches Association's Lou Lamoriello Award in 2016, presented during the Hobey Baker (Princeton Class of 1914) Award show on the NHL Network.

Read more about General Milley by clicking on the links to the articles below: